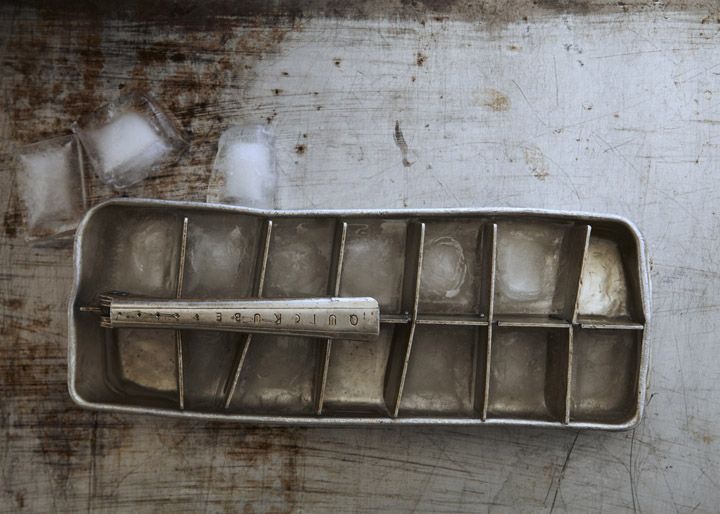 I was born in 1976. We didn’t have ice makers in our ‘frigerators. We had ice trays that we filled with water and
had to wait for them to freeze, so that we had ice. My granny still had those old metal ones. You had to yank the
handle up to crack the ice. Luckily, we had the modern ice trays. You grabbed each end with one hand and
twisted them opposite directions to crack the ice cubes out of the little compartments. Sometimes I only needed
a piece of ice or two. Instead of dumping the whole tray in the bucket, I’d pick out what I needed and return the
tray to the freezer. I would even return the tray to the freezer with only ONE piece of ice left in it, because I was
too lazy to fill the tray with water. I can’t tell you how many times I got in trouble for not filling those dang ice
trays! So much so, that when I moved out on my own for the first time, I was elated. NO ONE could get on me
for not filling up those ice trays. I was an adult! No one could make me fill up the ice trays, and I didn’t have to
fill up those stupid ice trays.
Until………..
I made some tea and I didn’t have any ice. I live in Kentucky. We drink ICED tea. Dagnabbit. Being an adult
meant that if I wanted ice in my tea, I had to fill up those stupid ice trays after all. That’s the first lesson I can
remember learning as an adult.
After that, the lessons weren’t as simple as filling up ice trays to have ice for iced tea. The lessons got
progressively more complicated. I learned that Long Island Iced Tea is NOT the same as my regular iced tea
and within hours would have my head resting on the toilet seat where a woman’s rear end had previously been
sitting. Ew.
I learned that I didn’t know how to be a mom but I had an adorable little boy with big blue eyes and chubby
cheeks that was counting on me to take care of him.
I learned that marrying a jealous and possessive man wasn’t such a good idea, after all.
I learned that my long legs, little bit of cleavage, and short skirts would only get me so far in life.
I learned there was another man that God had actually chosen to be my husband, and I’d found my way to this
man and back to God right about the same time in life.
I learned that I really did want another kid after all and that infertility sucked.
I learned that God answers prayers and He does it in His own kind of way, because not only did we kick
infertility’s butt, BUT, we had twins! However, God took one of those babies back for himself less than three
years later.
I learned that my six week hospital stay was NOTHING compared to what my baby boy went through in his
short little life.
I learned more than I ever knew existed about the human heart (did you know one can actually live when only
half the heart develops??), feeding tubes, oxygen, blended diets, pacemakers, and the best tapes for taping his
nasal cannula to his cheeks.
I learned that putting God in the center of my marriage would get us through anything.
ANYthing.
I learned that I had a strength I never knew I had, but it really wasn’t mine, because it all came from God.
I learned that there are amazing people in this world that far outweigh the evil ones.
I learned that my heart (not the physical one, but the spiritual one) and my brains are WAY better assets than
the long legs, little bit of cleavage, and short skirts.
I learned that nothing, absolutely, nothing, nothing, nothing, that I have ever experienced in life comes close to
the pain and grief of losing a child.
I learned that God loves me like NO human being on this Earth ever can and that this entire time, He has had
this plan for my life and all I had to do is trust Him and let Him lead me and yes, I know this is a crazy long run-
on sentence, but it is THE most important lesson that I’ve learned.
I learned that I have a purpose. My pain has a purpose. Chance’s pain had a purpose.  I am to live, by faith, and bring glory to God in all that I
do. It is hard to do that sometimes. I fail, but then I get up and try again. I share with others to love, support,
and encourage them to do the same.
What have you learned?
We all have a story. We all have learned some adult lessons. What have you learned? Maybe you’ve only
learned to fill up the ice trays…..that’s okay, except most people have those fancy ice makers in their
‘frigerators now. I know you’ve learned some hard lessons too.
I encourage you to teach those to others. We inspire others, even when we don’t realize that is happening. I
learned that today too.
Colossians 3:16
Let the message of Christ dwell among you richly as you teach and admonish one another with all
wisdom through psalms, hymns, and songs from the spirit, singing to God with gratitude in your hearts.
share

Fit for the Father